#Do1Thing: Human rights are not just about the law 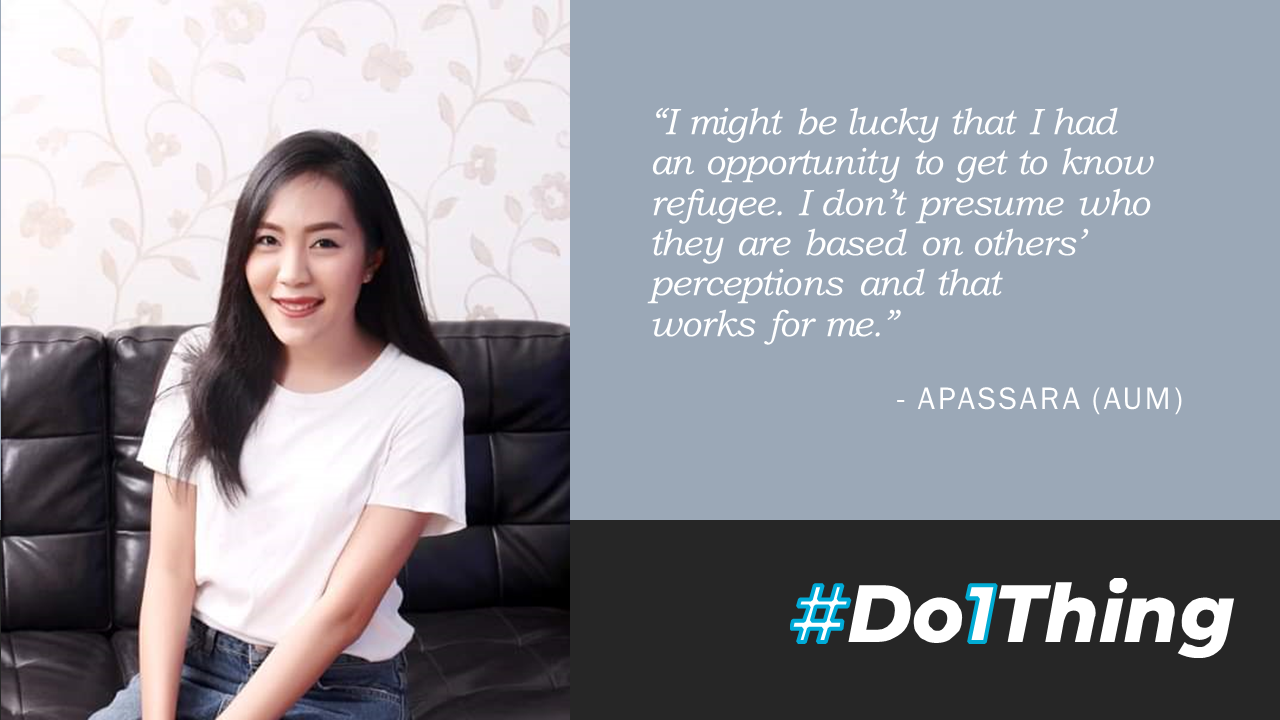 After Aum had an opportunity to work for UNHCR, she was inspired to pursue her graduate study in International Law. With all her experiences and background knowledge, refugee and human rights have always been her passion. After she graduated and was looking for a full-time job, she took this opportunity to volunteer as a legal advocate for an NGO* in Thailand to learn more about refugee rights and protection. She is delighted to share her insights and reasons why she chose to serve refugees without expecting anything in return.

“I decided to volunteer as I was always curious how NGOs help refugees in Thailand as the situation is quite complex in terms of legal service and protection for them.”

But that is not the only reason, she always loves to help people in need and wants to contribute something to this vulnerable group of people. Working for an NGO has broadened her experience as she found NGOs offer more direct and immediate assistance to refugees considering its non-governmental structure. As a legal advocate, she had to work closely with refugees, listened to their problems, and supported them as much as she could. But after a while, she realized there is more to do in protecting refugee rights…and it’s not easy without collective action.

“Thai people know very little about them. No one talks about refugee rights, but discrimination and bias towards them are out there. And I think media have more influence than expected. We have been embedded with the image of refugees that they are here to gain benefits, to commit crimes, to harm people, but these claims are not true. They are actually like us. Even though more and more sectors are trying to raise awareness about them, but it’s still not enough to make a change.”

When asked why she is not following the mainstream, she said “I’m living in reality, I might be lucky that I had an opportunity to get to know them. I don’t presume who they are based on others’ perceptions and that works for me.”

She believes raising awareness of human rights among people is the most important step. In her view, international human rights law could not be enforced effectively if there is not enough understanding and acceptance at the national level. People should not only know that human rights exist, but they should implement and avoid violating others’ rights in practice. Once everyone respects each other, we don’t even need law. Law is actually invented to make enforcement clearer in order to control behavior, but law could not control the human mind.

Human rights law is not like following traffic lights; it needs deeper emotional involvement. Once people truly perceived to respect human rights, they will also respect refugee as equal to themselves.

She has been through a lot of refugees’ experience, on the other hand, she is also familiar with national regulations that make her knowledge a combination of realities. She reflects that we should not expect a child whose house being burned to have all personal documents, and that child’s education should not be disrupted just because she/he does not have a document. As well as a family that fled their home country to save their lives, they might not have a second to grab money for their trip, and this family should be able to earn legally to ensure their kids could access education and healthcare as we do. They should not be thrown into detention for years. All these gaps are ongoing and no one seems to care.

“If refugee rights are made explicit, no one would dare to violate their rights. This is challenging for many countries but the plight of refugees should not be overlooked as well. They should be able to access fundamental rights as stated in international law. I hope one day these gaps will be eventually filled.”

As a legal professional, she understands why these problems continue. It’s complicated, but not too hard to change. She hopes the situation will be improved by raising awareness and clarifying the rights of refugees. Being open-minded and getting to know them could be one thing everyone can start from. She has learned valuable lessons from volunteering for refugees and would like to encourage everyone to try at least once in their lifetime.

*Aum volunteered as a Legal Advocate at a partner organization of JRS Thailand.

story
Thailand: Knowledge is the only thing that cannot be stolen 26 Aug 2022