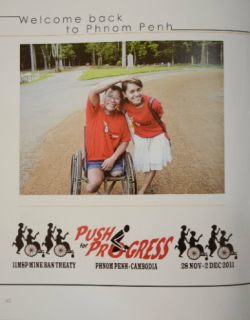 Dancers with disability and their friends will bless a world to be freed of cluster munitions and landmines before they join the Angkor Marathon on Sunday, December 8 along with other runners, some with disability. The event coincides with this week’s release of the 2014 Annual Landmine and Cluster Munitions Monitor, which reports the research conducted this year by the International Campaign to Ban Landmines – Cluster Munitions Coalition (ICBL – CMC).
.
Major findings in the Monitor include updates on the treaty status, use and destruction of mines, land clearance and contamination, the continued legal and illicit transfer and production of mines, and increased victim assistance. An emphasis on progress colors the report, stating that 2014 records “the lowest number of new causalities ever and the completion of clearance obligations in four states.” Yet there is still much work to be done before achieving the State Parties’ goal of a mine free world by 2025, agreed to at the Mine Ban Treaty’s Third Review Conference in June.
.
The Monitor reports that at least 185km2 of mined areas were released worldwide through clearance and survey in 2013-a decline from some 200 km2 in 2012-destroying almost 275,000 antipersonnel mines. Of the 185km2 cleared globally, 49km2 of the released land was in Cambodia, rating it in the Top 5 countries for its clearance program. The mine action programs in Afghanistan, Cambodia, and Croatia continue to account for the large majority of area released worldwide, demonstrating that with determination progress is achievable.
.
A new publication, Equal Basis 2014: Access and Rights in 33 Countries, is also available on bit.ly/EqualBasis2014. The report describes the situation for people with disability in 33 countries affected by mines, clusters, ERW – including Cambodia. It emphasizes that conflict and economic vulnerability exacerbate the typical challenges faced by persons with disability in accessing their rights. Recommendations to expand accessible and sustainable access to healthcare, rehabilitation, enabling environments and employment can begin to advance these rights.
.
Since 1996, the Angkor Wat International Half Marathon has raised awareness and relief for the victims of antipersonnel mines in Cambodia. Last year, over 2,650 disabled and non-disabled people from around the world participated in the Half Marathon race and over 1,840 for the 10K. This year, the dancers will perform at Angkor Wat on the day before the race to celebrate the resiliency and rehabilitation of landmine survivors and the determined efforts to create a mine-free world.


JRSAP participates in “Caring for Communities and Creation”, a JCAP flagship project 04 Mar 2022

news
STATEMENT: Jesuit Refugee Service and the Social Justice and Ecology Secretariat of the Jesuits Call for Peace and Protection for the People of Myanmar 01 Feb 2022