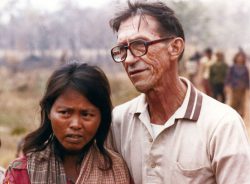 Australia, 5 June, 2012 — Last week Fr Pierre Ceyrac SJ died in Chennai at the age of 98. He was one of the most remarkable Jesuits I have met. Several entries in Wikipedia refer to him, always as ‘the famous Pierre Ceyrac’. This epithet usually designates someone with a well-crafted public personality. Pierre was different. He was so totally transparent that he invited everyone he met into his inner self. That is why he became so widely known and loved.

I first came to know and love Pierre in the Khmer refugee camps at the Thai border. He was then in his early seventies, working in the nascent Jesuit Refugee Service. He had been a missionary in India for many years where he helped form a national Catholic students association that brought together tens of thousands of students. He was a charismatic chaplain, attracting young people.

Pierre had an expressive face that showed sunshine and shadow. Tanned with the sun and red dust of the camps, and deeply lined, his face in repose seemed to bear the sorrows of the world, not as a burden but in compassion.

He had little concern for himself. Since he seemed to live on air and water, to live with him was a challenge. When looking for something to eat, you might find in the refrigerator gifts from visitors like a bottle of French Champagne and a large cheese, both untouched, but no bread, meat or fruit. His wardrobe consisted of a couple of pairs of trousers and loose shirts, also marked with dust, a pair of sandals and an Indian shawl.

He wore these when he returned to Europe to beg support for the Khmer whom he served in the camp. Among European leaders he made many friends, partly through his brother who was President of the French employers’ association and who sat on every significant economic committee. They always invited him to visit them. His problem, he confessed, was to get past the security at the gates.

In the camp Pierre was involved in social and pastoral work, supporting the groups in the camp that supported women and children at risk. He was ruled by a single-minded love of the refugees who alone mattered. But he was also patently open hearted and friendly to others, including the UN officials, the Thai army colonels, the paramilitary and others who controlled the life of the refugees. His love was undiscriminating and his judgments of people kind to a fault. That is not to say that he was naïve. His knowledge of the vagaries of the human heart was deep, and his instinct for how to act in ambiguous situations was acute. His advice saved me from imprudence on more than one occasion.

But when regulations clashed with the needs of refugees he was unbending. The camp regulations forbade bringing more than about five dollars in cash into the camp each day, and made it very difficult for refugees to receive money sent by relatives in the West. Pierre believed this was unjust, and he cashed cheques for the refugees. He would often smuggle in over $1,000, badly concealed. The Thai authorities clearly realised the situation but let it go.

The United Nations security regulations for NGOs were also strict. If a shell landed in or near the camp, all volunteers had to evacuate the camp. Pierre scorned these provisions because they provided security only for expatriates and not for the refugees. One day a couple of shells fell in the camp and killed five refugees. We went out in a convoy of a hundred or so four-wheel drives, most of us upset at having to leave the Khmer in their danger. Suddenly on the other side of the road came Pierre’s old ute fishtailing along the road (it had a natural tendency to steer into the bank). Pierre had heard of the incident and was on the way towards the camp to be with his people.

Pierre was not a great linguist. Nor was he a rubrically precise liturgist. In his deep husky voice all languages sounded the same. But the Masses which he celebrated in the camps and with volunteers were a deep source of encouragement and meaning. He always spoke of God’s love, and even his pronunciation of the word love was electrifying.

But the patent fit between what he recalled in the Eucharist and his own life spoke loudest of all. He gathered into the memory of what God did for us through Christ all the pain encountered and experienced by refugees and volunteers in the camps, all the joy that came with simple acts of accompaniment, and all the hope that life could come through this place and experience of death.

One Christmas Day he celebrated Mass for Vietnamese refugees whose camp had been shelled and destroyed a few days before. The refugees had been evacuated to an unsheltered place, and the Mass took place in the dust. Pierre welcomed the people with these words, ‘Today we have been invited to share the unutterable poverty of Jesus Christ’.

Like Francis of Assisi, Pierre knew all about the hardship of poverty imposed, and about the gaiety and freedom of poverty chosen. He was the rarest of things, a simple man.


JRSAP participates in “Caring for Communities and Creation”, a JCAP flagship project 04 Mar 2022

news
STATEMENT: Jesuit Refugee Service and the Social Justice and Ecology Secretariat of the Jesuits Call for Peace and Protection for the People of Myanmar 01 Feb 2022